19 (including 3 FNG’s and 6 2.0’s) planted the #shovelflag at #Legacy as part of it’s renaissance. The weekly numbers have steadily increased so our efforts seem to be well received.

Line up single file on the concrete path for #RodeoClown. @Flay grumbled and rolled his eyes as he and @Domer may be the only ones who’ve done this.
All PAX are lunge walking around the circle. Guy in front sprints to catch the back of the line. We went 2 at a time and did this until everyone had sprinted twice.

Short mosey across the parking lot to where I had the coupons staged. Back in the early days of #Legacy, CLT Metro sent down guys during the summer to lead our workouts (while also teaching us how to run a workout). While all the guys who came down led memorable workouts, my favorite was @DoReMi’s pain stations.

The sled station sets the pace. So everyone exercises at their respective station until the sleds have returned to the start, then rotate. We did this for 2 rounds. I had to modify here (added stations) as more PAX showed than I expected #goodproblemtohave 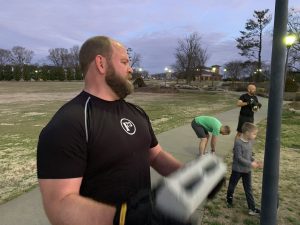 Mosey down to the rarely used mini-amphitheater (by the pond) for a 5min COP
5 derkins/10 dips/ 15 flutters (DC), repeat until time is up. lot’s of #mumblechatter 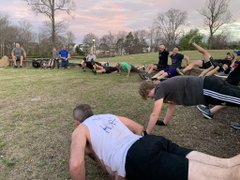 Short mosey over to 1D’s hill
Line up in 4 rows of 5
Backwards run up the hill. After 20 steps, 5 squats. Repeat this all the way to the top, 6″ until the six arrives

Mosey to the backside of the #Fern (YMCA) for #suicide merkins
Out and back to the 2nd line (2 merkins at the starting line)
4th line – 4 merkins, up to 10 merkins

Then on the wall for #PeoplesChair 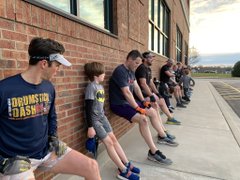 Mosey back to the starting point for 3 MOM

– We started the warmup with 17, then @RainbowWarrior arrived during SSH. Took him until merkins to get out of his car, hair right, gloves on. He was purposely stalling. But we forgave him immediately because his presence meant the #RainbowCoalition was reunited again.
– Just as we started on the coupon portion of the workout, @Caviar rolled in. There went my even numbers : ( But we’re glad he showed up, especially since I get to repay some of that pain he dished out on Thursday
– The sandbag sleds are tough and take some getting used to, for most. @Mac found his #wheelhouse with the sleds. #lowcenterofgravity
– FNG Kerrigan got his name b/c @Domer tripped him during #rodeoclown and he ended up with a bloody knee. Hell of a way to treat the guy you #EH’d
-Hate that we didn’t get a picture of @Seal’s alter ego #TheHoff. #nexttime
– Love having all the 2.0’s on hand. They bring a different kind of energy….

Announcements
– Jackalope is 5/9/20. Preblast and sign up here….
http://f3swamprabbit.com/the-return-of-the-jackalope/

– New website is almost ready to go live. Huge #Tclaps to @EasyBake for all the work he put into (again).

See ya in the gloom…