East Bound and Down 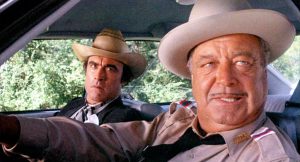 MISSION – East bound and down, Loaded up and Trucking

DISCLAIMER – Keep your foot hard on the peddle, son, never mind them brakes. Let it all hang out ’cause we’ve got a run to make

All pre-runs were discouraged as 19 tick turds promptly escaped a maximum security fart sack to the F3 underground. Today, still wanted by LB and the Bear, they survive as soldiers of fortune.  If you have a problem, if no one else can help, and if you can find them, maybe you too can fight the system like a true modern day Robin Hood.  Yeeeee Haawwww

Hope you are looking for something exciting and new, because RT has been expecting a light drizzle and you.  A handful of early rising PAX witnessed the excitement of the GS Opening Ceremonies.  So much so, that we got this cruise started a couple minutes early in honor of Short Barrel as Elmer crashed the gate going 98 like a rocket sled on rails.  Eat your heart out Church Lady.

YHC’s Million Dollar Man bionic ears picked up on Flo’s sarcasm as thick as bugs on a bumper when he quietly suggested 5 more burpees.  Punxsutawney Beamer perked and didn’t see his shadow, meaning the burpees lasted a little bit longer.  5 more burpees OYO.  Unfortunately the mumble chatter was gone faster than the New Coke formula and is now on America’s Most Wanted list.

A solemn Imperial Death March to the coupon pile because RT is about to put the hammer down.  NYOPT doesn’t have enough toys for everyone so just get 10 and we can share.  Some PAX can count to 10, some cannot.

THE MUST SEE LINE UP

8 Tabata Rounds – 20 seconds ON / 10 seconds OFF followed by a Convoy run up the hill to the stop sign, unload 5 burpees and return for more.

Unfortunately, we had a long way to go but a short time to get there. We only got ½ way through the Weike, so it is TO BE CONTINUED…  Return your blocks and head back to Flagtown for COT because Mary is already half way back to Texarkana.

This morning’s episode featured cameo appearances by The Commodore and Runoff. Hopefully they will be back despite their characters being killed off.  Beamer flattened the hills and straightened the curves like a Kenworth hauling logs.  Cheesesteak tried to catch a ride with the Teacher of the Year, but was quickly sent to the back of the line and has silent lunch for the rest of the week.  Lt. Dangle went home and punched his momma right in the mouth.  And all Cash Machines in the area are still out of order.

Fun was had by all and several muscle groups were exhausted. But at least you don’t have to raise your arms to adjust the rabbit ears or get out of the recliner to pick 1 of 3 channels on a turn dial.